ONAQUI HERD to be decimated 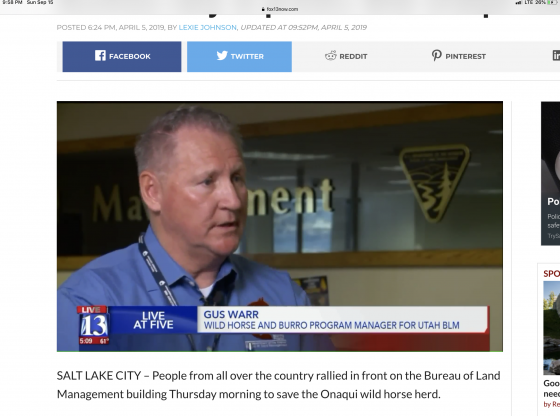 When lawyers are not utilized, the BLM is not stopped

No one wants to go to war against the BLM. It’s cumbersome, expensive and it pits the people against the government. There are certainly far better ways to handle differences of opinion than ‘lawyering up’ and going to court.

But in instances such as the battle to protect America’s legendary horses for the future generation of Americans to whom they actually belong, the only way to launch a preservation campaign to protect them in time from the legislators that, for reasons of their own, consistently side with the cattlemen that demand removal of these animals, a legal team of dedicated attorneys is their only viable means of defense — and they certainly cannot attend consultations or pay the necessary retainers on their own.

The Onaqui herd is the perfect example of government overreach. These animals are thriving on lands that have been theirs to roam for generations. They’re beautiful and accessible, tourists can get close enough to them to get phenomenal pictures with basic professional equipment.

They have a ‘following’ and are a threat to no one. They’re beautiful and independent and illustrate the strength and vitality of America’s rangeland WILDHORSE herds. There is no reason they have to be rounded up, moved or decimated: they’re healthy and plentiful enough that inbreeding is not a factor.

When the BLM becomes involved, herds are rounded up — usually so violently that deaths are inevitable. The horses are placed into BLM holding pens which the American public is forced to fund —and at the highest rates imaginable. Today, there are so many horses and donkeys languishing in BLM pens that the ‘expense’ of maintaining these animals that should have been left where they were is costing taxpayers an exorbitant $ 50 BILLION per year.

Critics contend that the true reason for the destruction of America’s herds is to make more land available for cattle ranchers to graze cattle via inexpensive ‘grazing permits’. As Americans are forced to fund these herd hijacking efforts during which they use helicopters and the manpower necessary not only to facilitate these ‘roundups’ but also to keep critics away from the sites so they cannot document the abuses happening there as they have during past roundups. The entire operation, according to those that have studied the issue, amounts to little more than fleecing the public to provide ‘favors’ for the politically connected.

Americans, after all, are forced to pay the BLM employees for the ‘care and feeding’ of thousands of horses that should have been left on the range. Our reporters are working on the breakdown of how much is spent for hay — but these animals receive little else and are usually ‘warehoused’ in the open where they are exposed to wind, rain, hail and sleet in the winter and horrific heat — often without shelter of any kind — during the summer months.

Keeping horses and donkeys in such conditions by private citizens is typically considered abusive.

Typical for the BLM, in one report Incident Commander Gus Warr stated that the BLM has [arbitrarily] decided that 80% of the herd would be “rounded up and put up for sale.”

These words almost always lead to the animals going to holding pens where they will be sterilized via whatever the BLM decides is convenience and will then stand about, unsocialized, isolated from their herd and miserable until they are finally released to go to slaughter across the border.

In a more recent report, BLM spokesman Reid indicated that just 200 horses would be rounded up — and that they were not part of what he described as the ‘core herd’ which would be left free but darted as part of a sterilization program.

The public, though, isn’t so easily fooled anymore — the BLM, under the guise of ‘management’, decimates and ultimately destroys these herds — and so few are left in the U.S. that they have effectively managed our wild horses into a very unnecessary extinction.

America’s wild burros face the same fate. The U.S. Forest Service has contracted with donkey wranglers to remove 5,500 donkeys just from Death Valley in California alone. Their justification? Ridiculous stories that accuse donkeys of doing everything from decimating the landscape to soiling watering holes: both of which can be proven false with even a modicum of research.

Consider this fact: China is marketing an ‘eastern medicine’ that is obtained by slaughtering burros and it’s being SOLD ON AMAZON — hence our government’s sudden interest in rounding up thousands of America’s burros.

Even though the viability of this product is completely unproven, China has wiped out all but a few million of their entire 11 million donkey population, leading to a situation where donkeys needed in agriculture are STOLEN to meet the demand — leaving people without the animals they need to sustain themselves and their families.

True to form, the horrific abuse of these animals is indicative of the psychopathic tendencies of those involved in such activities: the donkeys are tortured, beaten with hammers and often skinned alive.

They are among the kindest sentient beings known to man. They have been the mainstay of centuries of pioneers, builders, farmers and travelers and now are suffering the most barbaric treatment due to the inhumanity of the Chinese and those who would cater to them.

Jeff Bezos and his company need to discover what it means to be permanently boycotted and consumers need to find alternatives to shopping on Amazon. This is a topic too important to dismiss.

Who or What Are Horse ‘Flippers’?
Will China Wipe Out the World’s Donkey Population?