For All Those Praying for Scout: He GOT His Miracle

Home /Healing, Sanctuaries, Urgent Action, Volunteer/For All Those Praying for Scout: He GOT His Miracle 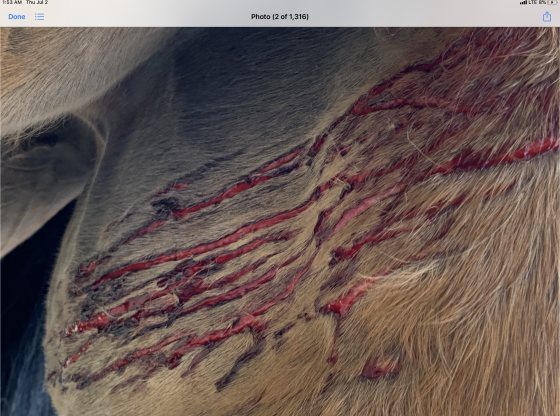 When Scout was attacked by a wildcat at one of the largest sanctuaries, everyone was in a state of shock.

None of us had ever had the misfortune of dealing with an animal attack — and the damage to Scout’s rear, left leg was so significant that the vet, being honest, told us we should let him go.

Scout, though, has a giant spirit and is a young [3 year old] thoroughbred that had already dodged death once when he was purchased from a slaughter pipeline facility where he was initially sent to go to slaughter, and then overlooked at the sale — sealing his fate.

As disappointed as we were to hear these words, we asked for Scout’s odds of surviving the ravages of the attack, only to be given the dismal statistic of ‘25% at best’.

This was a crushing blow: Scout is part of the family at Hoofprints.

As most of you know, the animals at the sanctuary are saved from slaughter and then trained to be Equine and Equid Assistance Animals. Scout is the epitome of a Buddy Horse — he’s everybody’s pal.

People love him — as do the other horses and donkeys. He may not the biggest horse in this considerable herd — but he has the great spirit of a giant, none the less! We wonder if he didn’t take on the cat [believed to be a cougar] intentionally in an effort to protect some of the other minis on the property.

We’ll never know what happened, only the devastating outcome for Scout, but the other horses walked him to the house at just after 3PM that day. He had been interacting with Amy and Larry at 1:30 and was fine. The attack happened in broad daylight! This isn’t a forested sanctuary, it’s a meadow. How unbelievably sad for this beautiful boy.

We do not believe in making the decision to let any animal go on unless there is simply nothing else that can be done.

Scout had already been taken to one of the finest horse facilities in Texas when we obtained this diagnosis. Dr Josh [Harvey] is a skilled veterinarian specializing in high end care for valuable horses. We wanted him to have the best care available to us.

We advised him that we didn’t save them from slaughter to fail them when the chips were down. We told him that we wanted to give Scout the very best chance of survival — and that we would be praying for him and if he was agreeable, we wanted him to provide Scout everything physically possible to help him make it through this crisis.

The pictures are graphic and horrific: we do not want to downplay the amount of damage Scout’s leg had sustained. There was an extensive amount of tissue missing — so much so that Dr. Josh said he could put two fingers, together, and reach all the way to the bone.

Large portions of musculature were torn in half and hanging from the wound. This was not a good situation and very little could be done — certainly no surgery, because there was simply nothing to reconstruct.

That said, though, one need only to e see the photographs to comprehend the miracle that Scout’s healing represents.

All About Rosie
ROSIE’s Puppies Have Arrived! 4th of July, 2020