Will China Wipe Out the World’s Donkey Population? 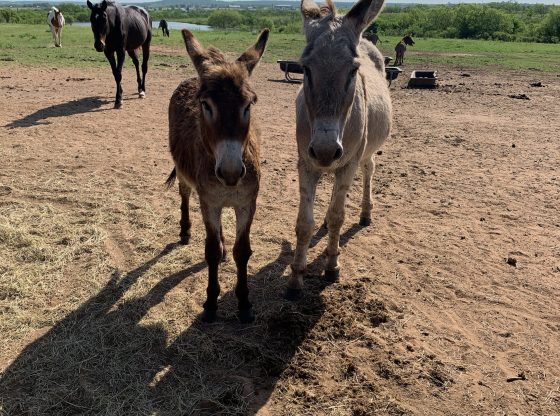 Without intervention, the population of this significant contributor to the world will be decimated

An unproven Eastern medicine is the catalyst behind hundreds of thousands of the world’s donkeys being sent to slaughter. As the so-called ‘medicine’ gains followers throughout the world, the demand for donkeys to slaughter has rocketed upwards — and with no means for speeding the breeding process, the world’s donkey population is at risk as China seeks access to any and all available donkeys — ethics be damned.

Even Amazon is using its giant sales network to push to market the highly questionable product known as ‘ajiao’ — in spite of the fact that just a handful of it is able to be harvested from the carcass of each donkey. Donkeys normally live to a ripe old age (50 years is common) and they are considered to be among the most valuable beasts sharing the planet. They’re docile, productive and hard-working. They are sturdy, stable and, due to their extremely fuel efficient metabolism, they’re among the most cost efficient beings in the animal kingdom — and the history of donkeys as beasts of burden and companion animals goes back at least 5,000 years.

For this reason, it is financially devastating for the tiny farming communities dependent upon them for help in producing and harvesting food to lose a donkey — and they’re now now being stolen worldwide to meet the growing demand for Ajiao.

Combine this with the reduction of wild burros in the U.S. and it isn’t difficult to do the simple math required to recognize that the world’s donkey population is at risk.

It takes a donkey at least a full year to produce a foal, 14 months at times — and twins are a rarity. These animals live long lives but must be trained to be manageable, and they require basically the same care a horse does — including regular visits to a farrier.

41 million were thought to exist worldwide in 2006 — 11 million of them in China alone. With the increased demand for AJiao, just 3 million are believed to remain there, with the African populations being decimated as well.

The loss of literally thousands these mainstays to the ecosystem is immeasurable — just recently the order was given to ‘round up’ 5,000 donkeys from Death Valley alone.

Have you ever visited Death Valley?

There is, quite literally, nothing there they could hurt. Why decimate these tiny bands of free roaming donkeys whose water locating and water hole digging prowess provide access to countless desert dwellers like themselves?

Combine these issues with the knowledge that efforts are being made to convince people across the world that they, too, should ‘cash in’ by building donkey ‘abattoir’ facilities to make the brutal killing of these gentle souls more ‘efficient’ and acceptable.

For those that [mistakenly] believe there are no horse slaughter facilities left in the United States and, thus, are left with the impression that America’s horses and donkeys are no longer in danger of being brutally killed for their meat, let us assist you in finding accurate and reliable information with which to make your decisions so that you might see through the ‘spin’ to something akin to the truth.

Immediately on the heels of the last slaughterhouse closing in the U.S., the ‘door’ was opened for people with a political ‘inside track’ to begin taking hundreds of thousands of America’s horses across the borders to Canada and Mexico to meet a horrific fate at the hands of slaughter aficionados.

Similarly, hundreds of thousands of America’s donkeys, too, have been literally ‘on the chopping block’ since.

Facilitated by the Obama administration, this has yet to change.

The BLM routinely ‘rounds up’ donkeys and horses, selling them for $25 ‘per head’ to people — often kill buyers — with no follow up whatsoever to ensure that they were ‘rehomed’.

Complicating things further, a goodly number of so-called ‘rescuers’ have stepped up and professed to be taking many animals from this ‘slaughter pipeline’, but that’s simply not happening either, evidenced by the lack of any measurable change in the numbers still reported [by government entities] to be transported across America’s borders to slaughter facilities.

Thousands more are flown to their demise — and these are often draft horses that have spent their lives in service to humanity. Even the Amish have been widely panned for leaving their livestock to suffer such a horrendous fate following years of use as labor animals only to experience such a horrific and blatant betrayal.

These are sentient beings who deserve far better.

Investigators who have gone into such facilities to educate themselves or to obtain video footage have reported being nearly unable to contain themselves at the sight of these magnificent and typically gentle, well-behaved beings abused: including being beaten, mocked, gravely injured and intentionally terrified on their way to being systematically destroyed for a few hundred dollars profit.

Who — knowing their pet horses and donkeys would suffer such a fate — would provide them to these ‘purveyors’ of death?

Too often, it is an unsuspecting public that believes the rhetoric: “the slaughterhouses have all been closed” and “these animals are no longer being destroyed”.

Though nothing could be further from the truth, they don’t realize that they are in grave danger — and that there are things they can do to mitigate the risk for the pets they no longer want to keep.

If you would like further information about these issues and more, contact Hoofprints.Org to speak to a representative, or request our brochures so that you can assist in educating the public about these travesties against Americas equine and equid populations. Our phones are always answered! You can also write us at staff@hoofprints.org.

We look forward to hearing from you.

ONAQUI HERD to be decimated
All About Rosie